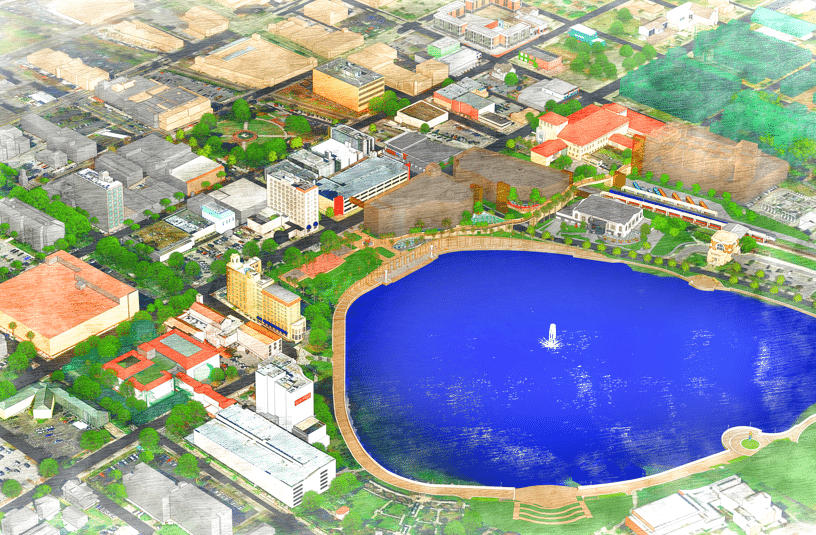 Why would an “unnamed” business group be opposed to a major residential project in Downtown Lakeland?  The answer to that question is, this “unnamed” business group, LEDC, is not opposed.  The LEDC wants to collaborate with the developer, City of Lakeland, the Lakeland Community Redevelopment Agency, (CRA) and any other interested organizations and or community members who are interested in how we might work together to create a bold vision for developing and connecting the 10-acre parcel to Lake Mirror and beyond.

Approximately 2 months ago, Lakeland city officials asked the LEDC if we would be interested in working with them on a potential pedestrian railroad crossover from the Lakeland Police Department’s parking lot over the railroad tracks onto Catapult property connecting to Lake Mirror.  This newly proposed crossover location was being suggested in place of earlier proposed sites on Kentucky and New York Avenues.

The City of Lakeland also was interested in building a parking garage on the current surface lot occupied by LPD.  This garage, the city said, could be a multi-modal transportation hub housing the Citrus Connection, Greyhound Bus Station, connect to the Amtrak Station and could be eligible for state and federal funding for up to 80% of its construction cost.

LEDC not only embraced the idea of offering right of way passage from the proposed garage site behind the Police Station to Lake Mirror, but suggested that this might be an opportunity to tie the CRA’s 10-acre site to Lake Mirror.  Furthermore, the LEDC offered to ask a local architect, WMB, at no cost to the City, to create a vision for what that connection could look like, and how it might become more than just a pedestrian overpass or parking garage.

Two weeks later, Steve Boyington, Matt Lukens and the team at WMB presented their plan for connecting the 10-acre site to the proposed parking garage and then to the pedestrian overpass to Lake Mirror and beyond.  We were literally blown away by their proposed plan to create a highline in downtown Lakeland.  The plan is out of the box, bold and extremely visionary.  Click here to see the plan.  This plan:

LEDC investors, along with city officials, have seen many successful mixed-use projects (retail, restaurants, residential and office) on city visits to Austin, Raleigh, Nashville and Chattanooga to name a few.  The LEDC’s position with regards to the 10-acre site has always emphasized mixed-use.  This was no surprise to the CRA and the City of Lakeland.  We have had multiple conversations with CRA and City of Lakeland officials regarding our concerns about creating a mixed-use development on the 10-acre site.  Click here to see a potential mixed-use development on the 10-acre site created by local architect Brad Lunz. This is a modified version of what was proposed 2 years ago.

Yes, of course we knew the CRA was going through the bid/RFQ process with yet another developer but were assured by city leaders that the project would include a mixed-use component if it was even approved.

Therefore, when we found out that the CRA was bringing a residential-only proposal on the 10-acre site to the City Commission publicly, for the first time on Friday, and voting on it on Monday, we were shocked.

Yes, the LEDC asked city leaders for a delay.  We asked for a delay because we were caught off guard, we were surprised, we had not seen the proposal, and this is an extremely big deal that affects the future of our downtown.  We don’t believe downtown projects happen in a vacuum, and certainly not ones of this magnitude.

The incentives given on this project affect our ability to incent future projects.  The debt this property has carried has handcuffed the CRA and the City from being able to invest in many potential projects downtown over the past 10 years.  So, when a decision of this magnitude is being made, yes, we asked for a delay because downtown matters to all of our citizens, it’s everyone’s living room.

Thanks to the City Commission’s 2-week delay, we have had a chance to see the proposal and hear from the developer prior to the final vote.  Therefore, in keeping with the Commission’s wishes that groups like the LEDC make known their position and suggestions regarding this project (and to do it quickly), here are the LEDC’s thoughts on the Frameworks project (The contents of this blog are being sent to all Commissioners & the CRA).

The LEDC believes the proposed developer on the 10-acre project, Frameworks, is a high-quality developer.  The LEDC also believes the CRA has done a good job getting a deal put together over the past year.  Would the LEDC like to see a mixed-use development with an office site included or a residential project with higher density and a transit-oriented design? Yes. With regards to density, the LEDC would prefer to see 5-story residential similar to Frameworks project in Sarasota vs. 3-story (no elevator) proposed project in Lakeland

Having said that, there is a proposal on the table, one the City Commission strongly supports and plans to approve October 16th.  The LEDC looks forward to collaborating with the Frameworks team on how we might connect their project with Lake Mirror creating more density and mixed-use development (residential, retail, restaurants, office) that would benefit all Lakeland citizens. 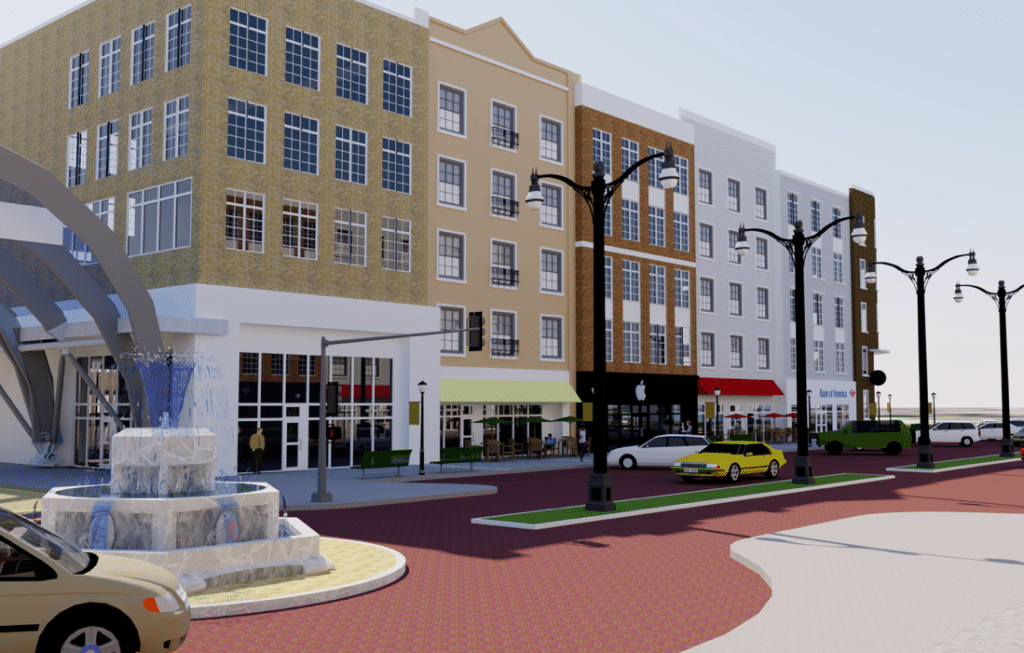 Have we been framed or is this the “Framework” for great things to come?  We choose to believe the latter and want to be part of the team that makes this project successful.  Our answer is not yes, but…  our answer is yes, how might we?  What do you think?  Can you get behind the Frameworks deal?  Are you inspired by the potential Highline project and what it could do not only for this project, but all of downtown?  Let us know, we would love to hear from you.